Half an ocean away on the beautiful tropical island of Guam is a very strategic cluster of U.S. military bases. It is the largest and southernmost island in the Marianas Archipelago known as Micronesia, and its location provides the most forward U.S. base in the Western Pacific.

Guam was “discovered” by Magellan in 1521, although it is believed the indigenous Chomorro people had been there from about 2,000 B.C. The Spaniards claimed the island as theirs in 1565, and it became an important stopover for ships sailing the Pacific trade route from Mexico to the Philippines. In 1668 Spain began colonizing the island and brought Catholicism to the region. There are still remnants of the colonial period, such as defensive structures and a governor’s palace.

Guam first became a territory of the United States in 1898 after the Treaty of Paris ended the Spanish-American War. The first U.S. military presence appeared shortly after that, with a U.S. Navy yard established in 1899 and a marine barracks built in 1901. A marine seaplane unit was stationed there from 1921 to 1930, and Pan Am airlines built a separate seaplane facility for their Pacific route. On December 8, 1941 – the day after the Pearl Harbor attack, Guam was invaded by the Empire of Japan, which overcame the small U.S. force stationed there (271 personnel) and the island was occupied for thirty-one months. The United States regrouped and fought the Second Battle of Guam in July and August of 1944. A large naval force and Marine and Infantry division prevailed. July 21 is still celebrated as Liberation Day on Guam. The battle for Guam in World War II was a deciding factor in the momentum of the war. Shortly after recapturing the island, the Navy Seabees moved in and built 5 airfields on Guam, from which the B-29 bombers flew attack missions on mainland Japan and the Western Pacific. The island is relatively small, 32 miles long and 10 miles wide at its widest point, comprising about 225 square miles. The U.S. bases take up about 29% of the land mass on Guam, which is significant. 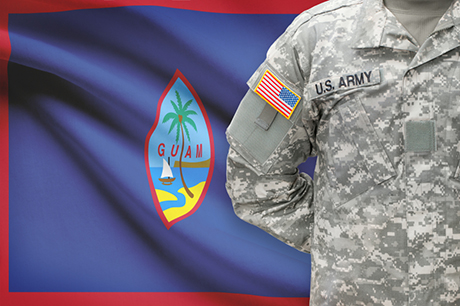 The Joint Region Marianas installation on Guam is the westernmost base of the Navy’s Pacific Fleet, sometimes called the Guardian of the Pacific. Currently it is estimated there are nearly 5,500 military personnel on Guam, mostly Navy and Air Force personnel. Guam is also home to the 36th Wing and the 734th Air Mobility Support Squadron of the Air Force at Anderson AFB, as well as a small contingent of Marines who provide security for the bases. It has been proposed that about 5,000 Marines will be relocated from Okinawa, Japan to Guam, but no definite dates have been set for that move. There is some pushback to this plan because of the strain additional troops and contractors will have on the infrastructure, but if it goes forward there will be more contracting jobs available for the buildup. The plan also has been stalled in Congress recently, pending review of the projects and costs.

Contracting jobs in Guam consist of mission-critical operations and support services for the bases, weapons support and maintenance, engineering. There are also maintenance jobs and service (such as cleaning and food service) jobs. If you are a civilian employee working for a U.S. military contractor on Guam, and you have been injured, you may be entitled to compensation under the Defense Base Act. This is a federal workers compensation designed for those workers injured overseas while working for U.S. contractors. It is an extension of the Longshore and Harbor Workers Compensation Act, and provides wage replacement and medical care.

Guam has been the testing ground for many of the cases which comprise the current interpretation of the Defense Base Act. Most notably, the concept of the “Special Zone of Danger” arose out of an injury which occurred on Guam while the employee was engaged in a recreational activity. This doctrine provides that the injury does not necessarily have to be incurred while on the job; a compensable injury may occur while engaging in recreational activities. The only requirement is that the obligation of employment (for instance, being in a remote and/or dangerous location) creates the basis for coverage.

If you have been injured while working for a U.S. contractor on Guam, or one of the military support organizations, then you may have a claim under the Defense Base Act. You should contact an attorney experienced in the Defense Base Act as soon as possible, because there are time limits for filing these claims. The rules and regulations can be confusing and you can easily make a mistake fatal to your claim. The attorneys at Barnett, Lerner, Karsen, Frankel & Castro, P.A. have the experience and the dedication to zealously advocate for you.

Hire Us Today!
Injured In Guam - Defense Base Act Attorney