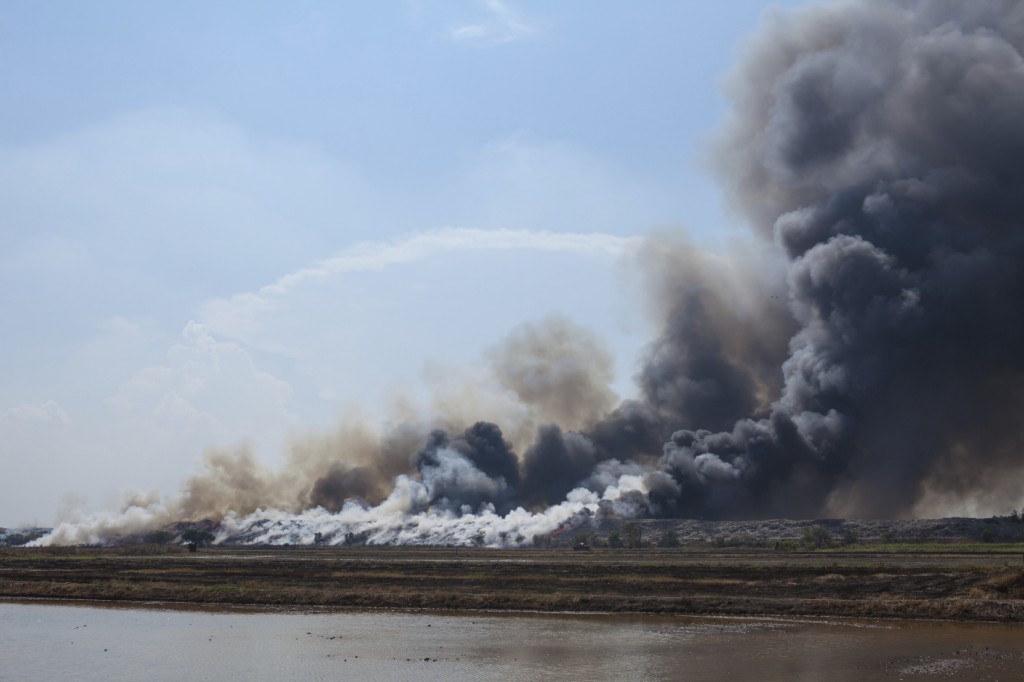 Thousands of returning veterans struggle with respiratory problems, especially those who served in Iraq and Afghanistan, and doctors increasingly believe that burn pits may be the culprit. Just as researchers began to understand the issue, Congress abruptly cut off the funding in this area.

For a number of years, burn pits were common not only in Afghanistan and Iraq, but also Qatar, Kuwait, and some other places. In most locations, burn pits disposed of almost every kind of refuse: everyday trash, old tires, leftover food, medical waste, vehicle parts, animal carcasses, and even body parts.

29-year-old Richard Vanhorn, a three-tour veteran of the Middle East wars who was exposed to countless burn pits, began experiencing breathing problems while he was still deployed. He was eventually diagnosed with emphysema and Deployment Related Lung Disease. “You feel kind of expendable,” he lamented.

Veronica Landry, who was a KBR contractor in Iraq for ten years, recalls that the burn pits were typically located close to barracks and soldiers were often told to take cover because of burning ammunition. “Pretty much every day we were exposed to it,” she said. Recently, Ms. Landry was diagnosed with bronchiolitis after a lung biopsy. The 40-something nonsmoker now depends on an oxygen tank to breathe.

The Department of Veterans Affairs steadfastly claims that there is no link between burn pits and breathing problems, partially due to the fact that no one knows exactly what went into a pit at any given time. The VA also points to a 2011 study which concluded that pollution and dust in the Middle East-North Africa (MENA) region is more of a health hazard that burn pits.

2011 is also the year that Dr. Cecile Rose at National Jewish Health led a team of researchers who, with a $500,000 DoD grant, tried to understand why so many private contractors and service members came home with breathing problems, while the civilians who breathed the same polluted and dusty air had no such issues. Dr. Rose called the team’s findings “alarming,” because “young and healthy” individuals returned home with “symptoms that are disabling.”

In 2013, Congress created the online Burn Pit Registry, which went live the next year. So far, fully a third of the respondents have been diagnosed with a serious lung condition, like:

Dr. Rose says she and her teams have treated over 100 such cases, as National Jewish Health in Denver is gaining a reputation as one of the best places in the nation for burn pit victims.

Essentially without explanation, Congress excluded burn pit research from the research list for 2016, after spending over $13 billion on burn pit-related research since 1992. Ron Brown, president of the National Gulf War Research Center, opined that Congress may have simply reclassified burn pits into another category of respiratory ailments.

Both researchers and victims are undeterred. Dr. Rose says her work will go on whether she receives federal funding or not, and Ms. Landry joined a class action lawsuit which is currently pending in a Maryland federal district court.

Now, a just-released book hopes to shed some additional light on the link between burn pits and respiratory disease.

Almost from the moment soldiers arrived in-country, the DoD ordered round-the-clock burn pits be used to dispose of almost any and all refuse. By 2003, there were over 250 burn pits at American military facilities in the Middle East, although forty years earlier, DoD’s own waste management guidelines said that open pits should only be used as a last resort.

According to a statistical survey, five of the six bases that produced the largest number of serious lung injuries during the Gulf War were at or near documented chemical warfare sites. Professor Ralph Allen opines that chemical residue embedded in the ground “could have become airborne while the burn pits were operational.”

Despite mounting evidence to the contrary, the VA denies about 90% of disability claims based on burn pit exposure.

At Barnett, Lerner, Karsen & Frankel, we routinely handle respiratory disability claims that arise under the Defense Base Act. To get the benefits you deserve as a former contractor, contact us today for a free consultation.