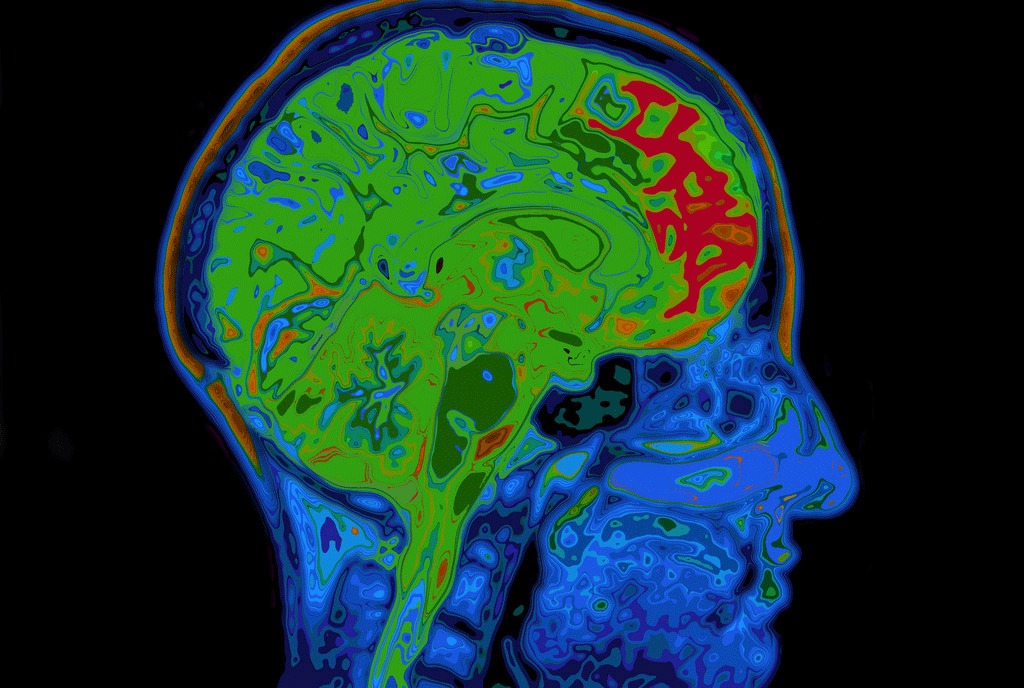 Researchers theorize that the “flashbacks” commonly associated with Post Traumatic Stress Disorder occur at an accelerated rate inside a victim’s brain, thus trapping the person in a near-continual loop that graphically re-presents the traumatic event.

Canadian doctors used magnetoencephalography (MEP) to compare the brain activity in four groups – traumatized soldiers, non-traumatized soldiers, brain-injured civilians, and healthy civilians – when they heard a trigger word, like “grenade” or “sniper.” The PTSD soldiers showed random brain activity at almost unheard-of levels, often exceeding 150 Hz. Curiously, the traumatized soldiers also showed a lower level of activity immediately after the spike in activity, suggesting that the brain trauma was much more long-lasting than previously supposed. During the study, the researchers took special precautions to ensure that the MEP only picked up brain activity, as opposed to outside noise from eye movements and other muscle activity.

Nevertheless, some peers criticized the methods used, on the basis that the frontal and temporal lobes, where the observation was focused, are especially prone to muscular artifacts and other non-brain stimuli.

This condition was first diagnosed as “shell shock” in World War I, especially beginning in 1916, as the war dragged on. Some recently-unearthed footage from the Seale-Hayne Military Hospital in Devon, England sheds some additional light on these early victims, especially when they were exposed to trigger words.

The second patient in this video – Private Preston – suffers from word blindness. He is completely unresponsive and in a near-catatonic state unless someone utters a trigger word; in this instance, that word is “bomb.” At that point, he immediately dives under a nearby bed and remains there for quite some time; when he emerges, he is clearly disoriented and probably replaying the events that took place in the trench over and over in his head.

According to the United Kingdom’s National Health Service, PTSD can occur either as the result of a sudden traumatic event, like a firefight, or prolonged exposure to traumatic events, such as the fear associated with an urban patrol.

After such events, fright, anxiousness, and other negative emotions are completely normal. These symptoms typically fade over time, even though they probably never entirely go away. PTSD is different. Most victims report that the traumatic event or events are stuck in a “loop” in their minds, and they cannot stop reliving the events. When the nightmares and feelings of helplessness are pervasive, even months later, PTSD is most likely an issue.

In addition to re-experiencing, most victims avoid any reminders of the trauma; for example, they will not watch violent TV programs, even including news programs, and they will not connect with veterans’ groups or even discuss the event with people close to them. Moreover, PTSD is often associated with a heightened state of emotional arousal. This condition leads to trouble sleeping and interacting in social situations.

PTSD affects women differently than men, and the condition is not the same in any two people. In a recent study, a significant number of PTSD victims showed improvement after they became pregnant, but an almost equal number of participants had worsening symptoms, postpartum depression, and issues bonding with their newborns.

The difficulties in diagnosis make the MEP research especially good news for victims, since the new tools can help prove an actual physical injury, which is a requirement for compensation under the Defense Base Act. Since 1941, this law has provided cash benefits to injured overseas workers.

The DBA is a no-fault law, so injured victims do not have to prove fault to collect benefits. Nevertheless, the hurdles to recovering money can be significant. In most cases, there are two parties in these proceedings: the injured victim and an adjuster or other representative from the insurance company.

These firms make money by collecting premiums and not by paying claims. So, the adjusters are often charged with doing anything possible to deny fair compensation to victims. Some of the more common defenses include:

Injured victims do not have to prove fault, but they still have to establish a causal relationship between the workplace and the and actual injury.

Rely on a Hard-Working Lawyer

At Barnett, Lerner, Karsen & Frankel, P.A., we are committed to both fair compensation and the timely resolution of your claim. Contact us today to get the benefits you deserve.

The Neurobiology Of PTSD Treatment