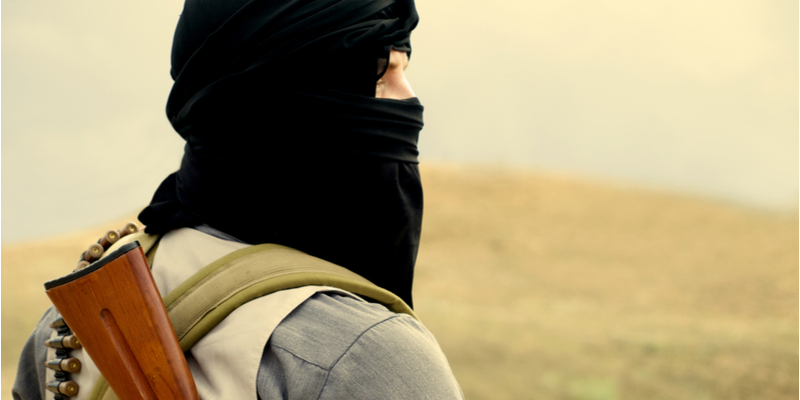 Frustrated with the slow peace process and a delayed prisoner swap, the Taliban refused to stop fighting during Islam’s holiest month.

Taliban spokesperson Suhail Shaheen said a ceasefire was “not rational” because “hurdles” in the peace process remained. Although the two sides signed a deal in February, dozens of Afghan soldiers have been killed in recent weeks. Afghan President Ashraf Ghani had hoped the Taliban would agree to a ceasefire, which would help the government focus on coronavirus. There are close to 2,000 reported cases in Afghanistan, and officials fear that number might be artificially low. They are also afraid that a sudden uptick could overwhelm the country’s shaky healthcare system.

According to the Taliban, Ghani is a “puppet” of the Americans.

Who is the Taliban?

The Students emerged as a distinct group in the early 1990s. The Taliban was one of many Islamic militant groups who fought the Soviet Union, which invaded the country in 1979. Almost immediately after that invasion, the CIA stirred up Islamic militants from around the world and supported their jihad (holy war) against the communist infidels. The Taliban were mostly religious devotees and warrior/scholars from eastern and southern Afghanistan.

The strategy eventually worked, largely due to Stinger shoulder-fired anti-aircraft missiles. In 1989, the Soviets left. American President George H.W. Bush immediately ordered the CIA to leave. That seemed like a good idea at the time. With the Soviet Union careening toward collapse, the last thing anyone wanted was an American military presence on its border.

But the move turned out to be shortsighted. The conservative Taliban emerged as the strongest militia in the war-torn country. By 1996, the Taliban controlled most of the country. Three nearby Islamic nations officially recognized the Islamic Emirate of Afghanistan, which had its capital in Kandahar instead of Kabul.

The conservative Taliban’s religious philosophy has been described as a hybrid of radical Sharia law and the jihadist mentality of Osama bin Laden. As such, the Taliban has acted brutally toward women, Christians, and Bhuddists. According to the United Nations, the group has killed thousands of civilians since it came to power. Other abuses include a scorched earth policy which has destroyed many acres of farmland and disruptions of UN food supplies.

An American-led invasion in October 2001 almost destroyed the Taliban. But by 2006, it had recovered, and the conflict has largely been a stalemate since then.

Some secret peace talks took place in 2011, but they quickly collapsed. Negotiations did not begin again in earnest until 2018. Afghan President Ashraf Ghani promised to release Taliban prisoners and recognize the group as an official political party if it ceased hostilities. Talks began again, and the parties agreed to a cease-fire in February 2020.

A peace agreement followed the ceasefire. The United States agreed to withdraw if the Taliban agreed to sever all ties with al Qaeda and talk to the Afghan government about a permanent power sharing arrangement. Finalization has been elusive and both sides have violated the ceasefire.

Why are Contractors in Afghanistan?

Private military contractors have done much of the fighting in Afghanistan. At one point, President Donald Trump considered fully privatizing the war effort.

Contractors offer flexibility. Regular service members must be trained for many months before they are ready to deploy. Private military contractors, on the other hand, can have boots on the ground a few days after a U.S. commander makes a phone call.

Deniability is another benefit. Contractors do not count in the official troop talley levels or in casualty figures. So, the U.S. commitment seems lower to a skeptical and war-weary public back home.

This same deniability applies overseas. Foreign leaders can say that the American troop presence is limited. Contractors, many of whom are native Afghans, know how to blend in.

As a result, although contractors receive higher cash compensation, their overall cost is much lower.

When contractors are injured overseas, the Defense Base Act compensates them for their lost wages and their medical bills.

Injured victims must immediately report such incidents to their supervisors. Since this notice must be written, email or text might not be sufficient. It’s best to send such electronic notice, print it, and put it in the mail.

This immediate deadline is usually not a problem in trauma injury claims. Occupational diseases, such as toxic exposure, are often a different story. Frequently, symptoms do not appear for months or years. Additionally, many victims do not immediately connect an issue like hearing loss with their work as a private military contractor.

A variation of the discovery rule protects victims in these situations. Victims need not report their occupational diseases until they know the full extent of the problem and connect that problem with a work-related situation.

Speaking of work-related, the injury or illness need not be directly connected to the victim’s employment. Additionally, the injury need not have occurred while the victim was “on the clock.” Courts only require a nexus, which is basically an indirect connection, between deployment and injury.

The classic example is a contractor who goes shopping in a market and a terrorist bomb explodes while she is there. Although the bomb was not directly related to her military contractor job, the DBA still applies.

That next level is a full hearing before an ALJ. This hearing is like a trial without a jury. Both sides can introduce evidence, challenge evidence, and make legal arguments.

Insurance companies know that an experienced DAB attorney has an edge during these hearings. So, many claims settle out of court, and on victim-friendly terms.