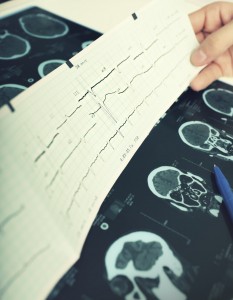 Diagnosing traumatic brain injuries (TBI) is challenging in that it typically requires fairly sophisticated magnetic resonance imaging (MRI) equipment and technology that is generally not available onsite. It often requires the patient to be transported to a specialty lab or some other capable facility. TBIs generally include structural injuries such “as a bruise or bleeding in the brain and what experts call a “milder form” of TBI,” or concussions “caused by a bump or jolt to the head [where] these injuries can alter brain function yet be difficult to detect, as they don’t always cause immediate symptoms.”

The various long-medical harms resulting from TBIs, if treated quickly and effectively, can be mitigated, but it requires a prompt diagnosis that historically, could not be made without transport of the patient to a working hospital with the proper technology. Often times, waiting for a diagnosis, whether it be a few minutes, hours, or days, can negatively affect the patient’s long-term prognosis and ability to recover in an expeditious and meaningful way.

Recent medical device and technological advances at the University of Connecticut are significantly changing the field of TBI diagnosis. A new device is in development that can quickly assess concussions and other traumatic brain injuries. Commonly referred to as the “Brainscope,” that device is designed to serve as a handheld instrument that can help clinicians identify traumatic brain injury (TBI) at the time and place of injury. In terms of functionality, the handheld device, described to be about the size of a smartphone, works by placing it on the patient’s head and measuring the patient’s electroencephalograph (EEG), or brain-waves, to gauge brain function after head injury. The technology uses sophisticated wave technology to determine, evaluate, and otherwise diagnose any brain deficiency resulting from an injury.

According to the article, the non-radiation-emitting instrument was initially “developed for military use in war zones” and is being adapted for athletes who sustain a TBI while playing contact sports as well as those in dangerous occupations such as police officers and bicycle couriers.  The advantage of such a device is its ability to expedite the diagnosis process. In 10 minutes, the device can help medical personnel determine whether it is safe for an individual who has had a head injury to return to the athletic field, combat, or other activity. With any head injury, time is of the essence, and for those military and combat employees that put their lives on the line each and every day, such technology provides them assurance.

The new technology will also assist with workers compensation claims, where in certain circumstances, the brain injury may not necessarily manifest symptoms until later or where the patient requires an immediate diagnosis. This new device greatly enhances the ability of health care providers to medically treat our service men and women, and will continue to be a valuable asset in diagnosing military personnel both in and out of the combat zone.

If your spouse or loved one was injured while working outside of the United States for or as a U.S. government contractor, you should contact the Defense Base Act attorneys at Barnett, Lerner, Karsen & Frankel, P.A. Worker compensation and other legal claims under the Defense Base Act can be substantial and involve a complex, arduous, and challenging process.