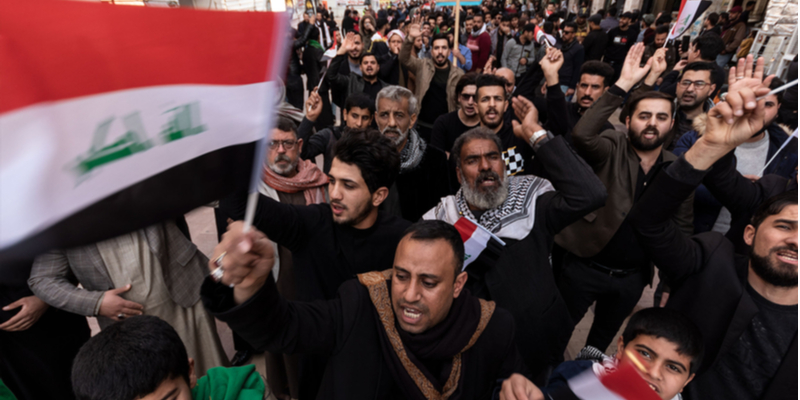 If war comes between Iran and the United States, Iraq will almost certainly be a battleground. Since the State Department does not want its people caught in the crossfire, they might be leaving the country.

In recent years, Iraq has tried to cultivate relationships with Iran and the United States, a policy which might soon backfire. As rocket and IED attacks have increased significantly in recent weeks, U.S. Secretary of State Mike Pompeo has reportedly threatened to remove the diplomatic corps from Iraq, a move which could signal the approach of war or provoke regional militias.

“We never comment on the Secretary’s private diplomatic conversations with foreign leaders,” the State Department said in a statement. “Iran-backed groups launching rockets at our Embassy are a danger not only to us but to the Government of Iraq.”

In 1990, Iraqi strongman Saddam Hussein invaded the tiny neighboring country of Kuwait. A U.S.-led international coalition expelled Hussein from Kuwait, but largely due to UN operational restrictions, stopped short of deposing him.

A little over a decade later, another U.S.-led coalition invaded Iraq again, this time with no operational restrictions. Hussein’s government fell within weeks, but a protracted insurgency quickly developed. As progress stalled and casualties increased, U.S. President George W. Bush ordered a troop surge which appeared to be successful. Even today, however, a stable democracy in Iraq remains elusive.

There is nothing new under the sun. Bush’s attitude toward Iraq was a lot like President Woodrow Wilson’s attitude about Germany at the end of World War I. Wilson believed that if the Allies deposed the Kaiser, democracy would take root in Germany. This process resulted in the election of Adolf Hitler. Similarly, Bush believed that Hussein’s ouster would pave the way for democracy in Iraq. At this time, no one knows if this story will have a similar ending.
As outlined below, contractors played a pivotal role in the Iraq War. If another war develops with Iran, the same thing will probably happen.

Iran has long been the Middle East’s biggest bully, a role which the country largely embraces. The recent Iran-China strategic pact takes things to a new level, at least according to some. Neighborhood bullies are rather easy to avoid. But if they become regional bullies, that is a much more concerning situation.

Several merchant ships were damaged in the Persian Gulf area in May and June 2019. The U.S. blamed Iran for the attacks and Iran denied responsibility.

In January 2020, Iran launched a rocket attack against Iraqi and American forces. During the melee, Iranian forces mistakenly downed a Ukranian commercial airliner.

It is not easy for the DoD to fight a conflict in the Middle East and North Africa region. So, the government heavily depends on contractors, both on the lines and behind the lines.

Contractors perform escort and guard duties which free regular servicemembers for offensive operations. Many servicemembers eschew such duties, but contractors, many of whom are former law enforcement officers, usually embrace them.

For that same reason, contractors often excel at intelligence gathering. Contractors have a unique skill set. They know how to go door to door, develop relationships with contacts, and obtain valuable information about enemy activities. Once again, regular servicemembers often do not enjoy this kind of necessary police work. But contractors often embrace it.

Behind the lines, contractors often train local forces. That is especially true if these security forces face a situation, such as an insurgency, that they were not initially trained to deal with. Many contractors are foreign nationals. So, they can easily overcome the cultural barrier, in addition to the language barrier.

On a related note, contractors often support American troops in a similar way. Many morale officers and other engaged noncombatants are private military contractors. Similarly, high-tech wars involve lots of high-tech maintenance. Contractors are able to perform these duties.

All wars end eventually. When that happens, the country must be rebuilt, or another conflict could develop. Contractors play an essential role in this part of the process. In addition to construction duty, armed contractors provide important security and deterrence functions.

Most overseas contractors, regardless of their area of expertise or operation, are eligible for Defense Base Act benefits. The two basic qualifications are service in an overseas war zone and a nexus between the deployment and the injury.

A place could be a “war zone” even if bullets are not flying. A country with any U.S. military installation, from a sprawling airbase to a single advisor, is a war zone. Additionally, contractors who work for certain friendly foreign governments are also eligible for DBA benefits. Citizenship is not a requirement either. Foreign nationals, like the aforementioned trainers, are eligible.

“Nexus” means an indirect connection. If Clark Contractor is shopping in a Nairobi market when a suicide bomber gets past security, Clark is eligibel for DBA compensation if he is injured. It does not matter that his injury was not directly deployment-related and the injury happened while he was technically off the clock.

The financial benefits usually include compensation for lost wages and payment for all reasonably necessary medical expenses.