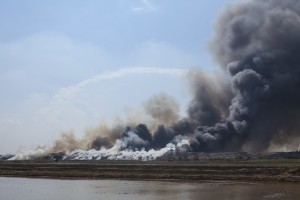 As a way to deal with the garbage that is produced, but has no where to go, in war zones, the U.S. military and military overseas contractors have burned solid waste in open pits called burn pits on or near military bases for years. This practice has resulted in countless burn pit injuries over the many years of their implementation.

According to government reports, the operations in Iraq and Afghanistan generated about 10 pounds of waste per soldier per day.  The military relied primarily on burning garbage because it was very quick and easy.  In 2010, the military estimated that over 250 burn pits were in use in Afghanistan and 22 in Iraq.  The number of pits in each country has varied dramatically though as the number of troops in each location has changed and as the nature of operations have changed.

When a new military installation is established and there is significant combat in the area, there may be little time to install an incinerator, sort trash to remove items that may generate toxic smoke or fumes when burned, or even implement waste reduction and recycling programs.  As such, burn pits burning all sorts of trash, from household personal trash, to food, to plastics and batteries.  As a result, these burn pits can produce huge amounts of smoke and, potentially, cause medical issues for those who are required to be near the pits.

The military discourages long-term use of burn pits, instead favoring incinerators or landfills.  However, As mentioned above, there remain many open burn pits because they are an expedient option for waste control.

Prohibited Items Not to be Burned in Pits

The military has recommended that many items should not be disposed of in burn pits because they may emit harmful fumes when burned.  The guidance specifically lists several items that should not be burned in burn pits:

However, the Department of Defense (DOD) has not thoroughly reviewed the burn pits to make sure that the operators of these pits are following the rules regarding prohibited items.  Military officials also note that other options may have been very limited in some military installations depending on the intensity of combat that some the troops at installations experienced which precluded the fabrication and installation of superior disposal methods, such as incinerators.  However, even by 2010, the Government Accountability Office found that some military-managed and contractor-managed burn pits were not managed in accordance with military guidelines.  Indeed, those operating the burn pits have complained that without sophisticated sorting programs and manpower it is difficult to sort out prohibited, toxic, items from the waste stream before it reaches the burn pits.  For example, many items shipped to bases are shrink wrapped in plastic, but there is not necessarily a convenient way to dispose of the plastic wrap once it is used.  Bases did not necessarily have access to incinerators, landfills, or recycling programs, only burn pits, so everything would have to go into the pits.

According to at least one scientific report, there is “suggestive” evidence that exposure to burned products contributes to reduced lung function.  However, the same report was unable to substantiate claims that there was a connection between the burn pits and cancer, respiratory diseases, circulatory diseases, skin diseases, or neurological diseases.

But, according to suits from several plaintiffs who worked overseas near the burn pits, they have experienced exactly those maladies.  The plaintiffs have argued that the pits were used to incinerate plastics, computers, heavy metals, and medical waste.  By burning these items in open pits, chemicals such as dioxin and volatile organic compounds were released into the air.  There has been a lot of back and forth in the courts about whether military contractors can even be sued for these claims, of if they are immune as agents of the military.  Also, some have argued that the general pollution of the air in Iraq and Afghanistan from non-military and non-contractor sources, specifically, industrial pollution and inefficient local civilian machinery create air pollution that is worse than in the United States, but that the burn pits are not a significant part of the overall pollution problem.

Additionally, the inspector general in Afghanistan has also expressed concerns about the dangerous fumes that may be emitted from burn pits.  The inspector general report complains that the DOD failed to follow its own policies on safely using burn pits and for failing to implement more incinerators that would be able to dispose of waste in a safer fashion.  Further, the report also notes that the employees or soldiers managing some burn pits were not even aware of some of the safety requirements that were implemented to avoid burning hazardous waste, and therefore, did not follow any safety requirements regarding the removal of prohibited waste items from the waste stream before they reached the pits.

Although the connection to long-term health effects and the burn pit pollution is unproven according to certain scientific studies, there are many who believe that unusual ailments, such as rare pulmonary diseases, rashes, and cancer may be to blame on toxic fumes emitted from the burn pits.  The VA is compiling a registry of veterans who believe they are experiencing negative health effects by working or living near the burn pits.  As of January 2015, the registry  contained over 30,000 names.

Many soldiers and defense contractors suffered serious injury as a result of the prevalence of burn pits on military bases in Iraq, Afghanistan, and in various other locations. Fortunately, in many cases the law allows those affected to receive compensation for the ordeal, providing funds for lost wages, medical expenses, and more. While the VA works to support military personnel, the Defense Base Act covers injuries affecting military contractors. The claims must be filed in a timely manner, so be sure to reach out to a Defense Base Act attorney to learn more about how to secure financial support to help you recover for your burn pit exposure.