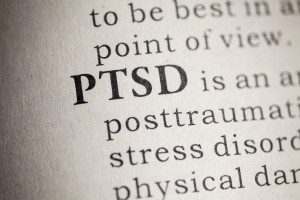 Post-traumatic stress disorder (PTSD) is a mental health condition caused by extremely stressful or horrific event(s).  PTSD can be caused by either personally experiencing a terrifying event or merely by witnessing one.  Examples of traumatic events could be the death of another, the threat of death, serious injury, physical abuse, or sexual assault.

It should be noted that anyone who goes through a traumatic event may experience difficulty coping with that event, but it does not necessarily mean that the person has PTSD. PTSD is often distinguished from traditional coping with stress by the fact that it lasts for months or years and actually the symptoms (such as anxiety, nightmares, flashbacks, or depression) become more severe over time rather than less.

Symptoms of PTSD may appear within about three months of the event, but may appear even years after the traumatic event. Symptoms can be placed into four types: intrusive memories, avoidance, negative thinking, and emotional reaction changes.

Intrusive memories are just that, recurring and unwanted reminders of the traumatic event that haunt the victim. These can include flashbacks in which the individual visualizes that he or she is in fact reliving the traumatic event(s) again and again. Victims can also experience nightmares. Finally, individuals suffering from PTSD can become severely upset in response to reminders of the event.

The second type of symptom is avoidance. With avoidance, the victim suffering from PTSD tries to avoid any reminders of the event, including places, activities, or people that may trigger a reminder of the event that led to the trauma.

Third, victims of PTSD may also suffer from major changes in their emotional state. The individual may become easily irritable or guarded. He or she may experience great feelings of shame or guilt revolving around the traumatic event. The individual may also suffer from insomnia or be unable to concentrate on tasks before him and, finally, he or she may also be startled easily by loud or unusual noises.

Fourth, are negative changes in one’s mood. The individual may become depressed or emotionally distant to friends and family. The person may feel hopeless or lose interest in activities that he or she once enjoyed.

The exact cause of PTSD is not known. Some people who experience the same event will have different reactions to it and some may not experience PTSD while others will.

Doctors believe that a combination of personal factors contribute to PTSD:

1. Inherited mental health traits (such as family history of depression or anxiety)
2. Life experiences, the actual events that have transpired over one’s life
3. Temperament or personality of the individual
4. Brain chemistry and hormones

These four major factors likely play into how one deals with an event that may trigger PTSD.

A psychologist must perform a thorough psychological examination before determining whether someone truly has PTSD or not. To meet the medical criteria for PTSD, one must be exposed to a traumatic event such as the threat of death, violence or injury. Second, the person must exhibit certain symptoms. These symptoms may include flashbacks, nightmares, emotional distress or physical symptoms triggered by reminders of the traumatic event. Third, for more than a month after the event, the individual feels depressed, withdrawn, sleepless or experience difficulty concentrating. The individual may also be unable to remember the details of the traumatic event.

When someone may be suffering from PTSD, support can be a critical benefit to coping with it. Those suffering through trauma, whether or not it is officially PTSD, can benefit from connecting with family and friend who can comfort the afflicted person and listen to the individual’s concerns and worries. It may also be a good idea to seek out a doctor who may be able to help as well. Doctors can provide therapy as well as medication treatment that can help someone with PTSD cope with the symptoms. Getting help sooner rather than later can be helpful in preventing small problems from growing into big problems when it comes to depression, anxiety, and particularly PTSD.

For those suffering from PTSD, two common treatments are medication and psychotherapy. Psychotherapy consists of various specific medical techniques. For PTSD, two common types of therapy are cognitive therapy and exposure therapy. Cognitive therapy is designed to allow the patient suffering from PTSD to talk through the events that may be troubling them and develop ways to cope with memories of those events by realizing what negative thinking is influencing the patient. Alternatively, exposure therapy is designed to allow the patient to safely confront the frightening event(s) and cope with the event(s) effectively. For some individuals, group or one-on-one therapy can be helpful in dealing with the pain of PTSD. These therapies can allow one to connect with others and rebuild social relationships that may have become damaged due to PTSD.

Additionally, medications are also frequently provided by doctors to those suffering from PTSD as a method to cope with the ailment. Doctors will work with patients with PTSD on a case by case basis to determine what, if any, medication is appropriate for their situation and the associated symptoms. Some patients may be prescribed either antidepressants or antianxiety medications depending on the specific nature of the symptoms. Some patients find that they need to try several medications or different dosages before finding a good fit for them, so it is important to maintain open communication with one’s doctor.

If you would like more information about how PTSD relates to compensation under the Defense Base Act please contact an experienced Defense Base Act attorney to go over your possibility of a claim.