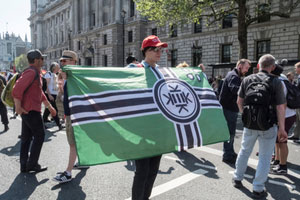 An Afghanistan contractor is heading home early after video surfaced of him wearing a Kekistan flag patch on his flight helmet.

The unidentified MAG Aerospace contractor was training UH-60 helicopter crews and pilots in Kandahar. The camera clearly showed a Kekistan flag on the left side of his helmet. Many white nationalist groups have embraced this emblem, which is a copy of the Nazi flag. It is green instead of red, and it replaces the swastika with the Kek symbol. Kek is an ancient Egyptian god which some white nationalists have co-opted for their own purposes.

A spokesperson for Virginia-based MAG Aerospace said that the company promptly fired the contractor after video surfaced. “The wearing of the Kekistan flag is a form of partisan political activity and wearing it while on duty, violated the Department of Defense policy,” she stated.

How do I Get a Military Contractor Job?

A disproportionate number of regular servicemembers are nonwhite and from economically disadvantaged backgrounds. But private military contractors, in contrast, some from all walks of life.

Some contractors are former servicepeople. To paraphrase Captain James Dudley’s line to volatile Officer Bud White in L.A. Confidential, “the country needs smart men like Lt. Exley and direct men like yourself.” In places like Southwest Asia, these direct men sometime accompany regular servicemembers on combat patrols. By law, contractors cannot participate in offensive operations, and these patrols get very close to that line. So, many of these contractors escort convoys and man checkpoints.

If you have a military background, there may be a place for you as an overseas contractor, especially in an area like Syria. There are a number of stateside companies who need “direct men like yourself.”

Other contractors are former law enforcement personnel. Such people do well in places like Iraq and Afghanistan. Contractors in Syria fight in support of insurgent rebels against strongman Bashar al-Assad’s government forces. But contractors in Afghanistan and Iraq fight against Taliban, ISIS, and other insurgent groups. Their missions usually involve intelligence-gathering and other law enforcement-type operations.

Former cops have a combination of toughness and compassion that some former servicemembers do not have.

Finally, many overseas contractors are the Lt. Exley type, or they do not hold guns at all. They work in combat support or on reconstruction projects. The combat support could be something like a chef, mechanic, or morale officer. These positions could also involve drones or other electronic surveillance/intelligence operations. Reconstruction contractors typically supervise building projects, while local laborers do most of the hammering and nailing.

Some of these contractors are not American. That is especially the case with regard to combat translators. Even non-American combat support contractors may be eligible for Defense Base Act compensation, as outlined below.

Your Rights as a Contractor

Contractors both inside and outside the United States have a number of rights, but political expression is usually not one of them. Political speech is usually protected speech for some public workers. A sheriff’s deputy can not be fired for running against his boss or backing a political opponent. Such an arrangement could make things uncomfortable around the office.

As mentioned, the Hatch Act is also directly applicable in this situation. Many believe, with good reason, that the army must always be a non-political entity.

That being said, contractors do have a number of legal rights. For the most part, employment discrimination laws apply both stateside and abroad. An employer can not base an adverse decision on a status, such as:

Many of these areas are somewhat controversial. For example, it is not clear whether the sexual orientation prohibition also applies to transgender individuals.

Equal pay laws also apply to contractors. However, equal pay is usually not a problem. Most contractors earn substantially more than their servicemember counterparts. That higher pay offsets the facts that contractors have no long-term job security. Once their deployments end, their paychecks end, as well. Moreover, contractors almost never have health insurance or other employment benefits.

Your Right to Injury Compensation

Injury compensation is perhaps the biggest exception to the “no-benefits” rule. The Veterans Administration provides injury care for injured servicemembers. Likewise, the Labor Department provides care for injured contractors, via the Defense Base Act. These benefits are available to any government contractors who are injured overseas.

Medical bills are one element of this compensation. Injury victims do not need to prove fault to obtain compensation for:

To be eligible, the injury must be a physical injury. There is a mountain of evidence that PTSD is a brain injury and not a processing “disorder.”

If the victim is permanently disabled, the DBA may allow a one-time payment depending on the nature and extent of the disability, along with some other factors.