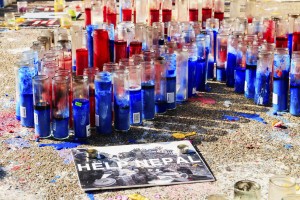 The news has been full of the horrific scenes coming out of Nepal. The worst earthquake to hit Nepal in nearly a century was a 7.8 magnitude. It leveled homes and businesses, caused avalanches on Mount Everest and has kept the populace on edge ever since with its aftershocks. Some of these aftershocks have resulted in additional damage to the buildings, have caused additional deaths, and certainly have rattled everyone’s nerves. To date, over 8,000 people have been killed and many thousands more injured. The hospitals are overwhelmed and damaged, and the inevitable problems with sanitation and food and water that follow a natural disaster are a daily challenge.
The current living conditions are dangerous and deplorable. People who have no home left, or who are too frightened to return to their homes, are sleeping in the streets or in tent cities. These tent cities are overwhelmed with trying to keep the survivors healthy and fed. Rural areas outside Kathmandu are remote and difficult to reach because of the mountainous terrain. The scope of the death and destruction will not be known for some time, and already six U.S. Marines and two Nepali soldiers have lost their lives in attempting to deliver aid to a remote part of the country. The high altitude and treacherous terrain make using helicopters difficult and dangerous.
Since the first earthquake on April 25, humanitarian aid has been pouring in to the Himalayan country. Fifty countries and several organizations such as the Red Cross have pledged aid and sent in teams of workers, including the United States. The primary organization from the U.S. in Nepal is the U.S. Agency for International Development (USAID), which is a non-profit entity set up to deliver aid in needy countries. (You may remember that the U.S citizen recently executed by terrorists in Syria was an USAID worker) There are also U.S. Marines deployed to assist in the efforts. At one point the planes carrying aid, rescue workers and supplies could not get into Kathmandu because the airport was closed, further frustrating relief efforts. Remote villages went a week or more without receiving aid.
Add to this destruction is the fact that monsoon season starts soon, and it is very likely that there will be disease outbreaks. After Haiti’s devastating earthquake, there was an outbreak of cholera which further complicated the recovery efforts. It appears that recovery for Nepal will also be a long and arduous process, with many challenges and the need for many hands to assist in the effort.

How the Defense Base Act Applies to Nepal’s Situation

In this blog, we often talk about the fact that where there are military or humanitarian contractors working around the world, and that there is also the possibility of injury occurring in the course of that employment. When a worker is injured overseas, there is a workers’ compensation program available to them. This program provides medical care and wage replacement and is very important when someone is injured and cannot work. The injured worker and their family rely on these benefits.
The Defense Base Act (DBA) is an extension of the Longshore and Harbor Workers Compensation Act. It serves as a workers’ compensation program for those injured while working overseas for military contractors, humanitarian organizations and on public works contracts supported by the U.S. Initially the DBA was put in place in 1941 for those workers on U.S. military bases around the world, because their home state workers’ compensation programs did not apply in the event of an injury. It has been expanded over the years to include other workers, such as those who will be helping to rebuild Nepal. Companies who are granted U.S. government contracts overseas are required to carry DBA insurance, and there are fines for not doing so.
While filing a DBA claim is (at least initially) an administrative process, it can also be a difficult one. Insurance companies are sometimes reluctant to approve a claim and will deny it if they think the injury occurred as a result of your own negligence or intentional acts (such as being intoxicated). They will attempt to deny on the basis that whatever you were doing when you were injured was not within the course and scope of your employment.
However, if you are working in a remote or dangerous locale, whether due to war or natural disaster or any other circumstances, there is a concept known as the “Zone of Special Danger” and if you were injured while in a particular locale for a job in that Zone, then you may be covered even for injuries occurring while engaging in recreational activities or during times you were not actually working. The reason for this is that the requirements of your job necessitated you be present in that dangerous or remote locale, and you should be covered under the DBA at all times.
There are also special rules about the time within which you can file a DBA claim, and if you fail to timely file, you may be prevented from reaping the benefits which would otherwise be due to you. This time limit can foreclose any recovery on even the most valid of claims, so it is important to file your claim within the time limit.
An experienced Defense Base Act attorney can help guide you through this process, and it is best to get their help from the outset of your claim. Experience and knowledge go a long way to ensuring that you receive all the benefits of the DBA to which you are entitled. This is not your average state workers compensation case, and you should only trust your future benefits to an attorney experienced in the DBA. If you have been injured working overseas, or a loved one has been killed in the course of working overseas, you should consult a knowledgeable, experienced DBA attorney. It is the best bet for obtaining the best results for your injury.