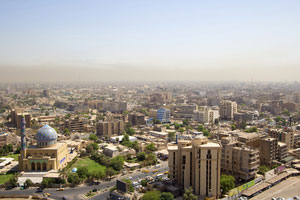 Federal prosecutors recently announced that they would try former Blackwater contractor Nick Slatten for a third time. They allege he was the instigator in a disastrous incident in Iraq that killed 14 civilians and injured 17 others.

U.S. District Judge Royce Lamberth ordered jury selection to begin October 29. Prosecutors plan to streamline this third trial. They predict it should take about 15 days. The previous jury heard five weeks of testimony and deliberated for 16 days. According to prosecutors, Mr. Slatten fired first, initiating the so-called Nisour Square Massacre. But that conclusion may or may not be correct.

Mr. Slatten, who remains in jail, said that he was a “POW in my own country.”

What Happened in Nisour Square?

In most cases, a military commander would never face adverse legal action over an incident like the Nisour Square shooting. But Blackwater was not technically part of the U.S. military, and the height of the Iraq War was definitely not a normal case.

In September 2007, a contingent of Blackwater contractors escorted a supply convoy through the busy Nisour Square area of downtown Baghdad. Earlier, the contractors received intelligence reports that a white Kia might be carrying a car bomb. These two facts are basically the only ones that are unobscured by the fog of war.

As the convoy moved through the Square, one contractor thought he spotted a suspicious vehicle that matched the description in intelligence reports. Supposedly, the driver made some threatening moves. Opponents later made much of the fact that the car’s driver turned out to be a young med school student.

Nick Slatten was supposedly the first contractor to open fire. Others fired in support of their comrade. When it was over, there was no terrorist and a lot of bodies.

The State Department immediately revoked Blackwater’s license. Five different agencies, including the FBI, conducted investigations. While there was nothing clearly definitive, most indicated that the guards probably did something wrong.

A long legal and political imbroglio followed. In December 2008, under intense pressure from both Washington and Baghdad, federal prosecutors filed charges against five Blackwater contractors. A district judge summarily dismissed the cases, concluding that they relied to heavily on testimony from potential co-defendants who received immunity. Then, following a closed-door hearing, an appeals court revived the cases, cryptically remarking that the judge had misapplied the law.

In October 2014, a federal jury finally convicted Mr. Slatten and three others. Mr. Slatten received a life sentence; the other three received 30 years each. An appeals court reversed Mr. Slatten’s conviction, ruling that he should have been tried separately. His next trial ended with a hung jury and the prosecutor’s vow to retry him for a third time.

Why Were Contractors There?

Primarily, combat contractors are in places like Southwest Asia to give commanders flexibility, artificially lower troop and casualty figures, and placate locals.

The DoD usually cannot respond to an emergency situation in a place like Iraq or Syria. The specific type of warfare in these countries requires many months of training. By the time a contingent of soldiers is ready, the need has long passed.

Contractors are much more flexible because they can have boots on the ground in a matter of days. Since most combat contractors are military veterans, they usually do not have a problem blending in with their comrades in arms. Then, when the situation changes, the DoD sends the contractors home. There is no need to worry about a redeployment.

For the past several years, Blackwater founder Erik Prince has touted this flexibility in his plan to privatize the Afghanistan war. So far, President Donald Trump does not seem inclined to do so, but things change.

American military commanders are not the only people who like contractors. American politicians like them, as well, especially if the conflict is not a very popular one. Contractors do not count in the official troop tallies, so the American commitment seems lower. Furthermore, contractor casualties do not count in the official figures either. So, the conflict seems less bloody.

Speaking of popularity, American soldiers are not very popular in many parts of the world. During World War II, British civilians often complained that American soldiers were “overpaid, oversexed, and over here.” If that’s how close allies feel, imagine how reluctant allies must feel, especially when most of the fighting is next door and not on the other side of the English Channel.

Since they do not count in the official numbers, contractors make the American commitment look smaller to locals. Furthemore, contractors often do not build permanent bases or other such physical infrastructure. This reduces their footprint even further.

What Happens When They are Injured?

All these injuries involve substantial medical bills. Trauma injuries, whether from a roadside IED or a fall from a height, often cause serious wounds. Head injuries, in particular, are very expensive. Hospitalization alone may cost $100,000. Extended physical therapy can add tens of thousands of dollars more.

Cancer and respiratory disease from burn pit exposure is probably one of the highest-profile occupational diseases from Iraq and Afghanistan. Cancer and other treatments may cost more than $10,000 a month. Post Traumatic Stress Disorder is a major issue as well, especially since brain injuries are always permanent.

Defense Base Act benefits pay for these and other medical expenses. In fact, the DBA pays for all reasonably necessary medical bills. That includes items like:

The insurance company often challenges expenses on the grounds that they are not medically necessary. So, it is important to have an attorney who is a strong voice for you during all DBA proceedings.

Government Lawyers Not Giving Up in Nisour Square Case