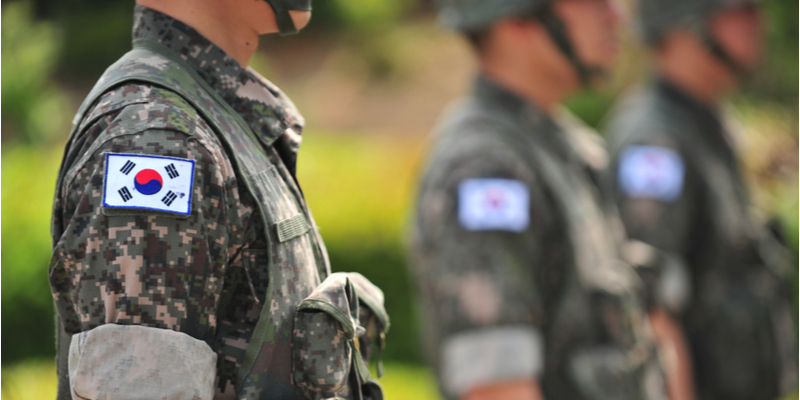 Four South Korean civilians died after an SUV collided with an armored car near the Rodriguez Live Fire Complex.

The wreck, which happened near Pocheon, prompted the U.S. Eighth Army to “temporarily suspend training in the area,” per a statement. According to investigators, an SUV carrying four people in their 50s rear-ended an armored vehicle. Investigators believe that one driver swapped with another one in the moments before the crash, and that might have contributed to the wreck. Emergency responders rushed all four people to a nearby hospital, where they were subsequently declared dead.

Police said it was common for U.S. servicemembers to use this road as they returned to base from training exercises.

For a while around 2018, it looked like the two Koreas would agree to end almost 75 years of hostilities, if not completely reunify. If that happened, most military contractors would probably leave Korea. But a lot can happen in two years. Now, it looks like the contractor presence in South Korea might expand.

North Korea is by far the most isolated country in the world. So, any news stories emanating from Pyongyang must be read with a grain of salt. However, it seems clear that longtime strongman Kim Jong Un is in poor health. His sister, Kim Yo Jong, recently ascended to the number two leadership spot. If she takes over for her brother, no one is sure what the new regime would look like.

Unpredictability is also the watchword for North Korea’s military. The nation might or might not have a nuclear capability and/or a ballistic missile capability. South Korea has a strong economy and a strong democracy, but it cannot possibly withstand such an onslaught by itself. So, it appears that the U.S. Eighth Army, along with ist supporting military contractors, is not leaving the Korean Peninsula anytime soon.

In many parts of the world, private military contractors are on the front line of the Global War on Terror. But this war has not come to this part of the Pacific Rim, and it appears that it might never do so. Nevertheless, contractors still play an important role in South Korea’s defense.

Training is very important. South Korea has a well-developed military infrastructure, but outside help is always welcome and necessary. As advisors or in more active roles, private military contractors help forge South Korean citizen-soldiers into soldiers.

Contractors also serve in vital combat support roles. Troops are still dug in near the North Korean border, and many of these troops are contractors instead of regular servicemembers. Although contractors are paid more, in the long term, they are much cheaper for the DoD. Once their deployment ends, the financial commitment ends.

A little further behind the lines, contactors verify identification badges at checkpoints and serve in other seemingly mundane roles. But MPs are an important part of any combat force. Order and discipline on the base is essential to order and discipline in the field.

Finally, as they have for generations, contractors serve in non-combat support roles. The “camp followers” of the 1700s and 1800s are today’s private military contractors. These individuals are cooks, mechanics, morale officers, and other essential team members.

In all these situations, private military contractors are much more politically palatable on both sides of the Pacific. Since they do not count in the official troop tallies, Washington politicians can downplay the size of the American military presence in South Korea. Politicians in Seoul can do the same thing, because nobody wants to be the Americans’ waterboy.

Those benefits include both wage replacement and medical bill payment. In some cases, such as defective product-related injuries, additional compensation might be available.

Generally, the DBA pays two-thirds of an injured victim’s Average Weekly Wage for the duration of a temporary disability. The AWW calculation is sometimes complex, because it serves as a baseline for determining future wages. So, if the victim was unemployed prior to deployment, the last 52 weeks of wages might not be an accurate forecast of the expected wages. That is especially true if the victim just started and was earning a probationary wage.

If the injury is permanently disabling, the DBA usually pays a much larger sum to compensate the victim and the family for future lost wages.

The medical bill payment benefit includes all reasonably necessary medical expenses. In many cases, the hospital bill is little more than the tip of the iceberg. Medevac expenses, along with the physical therapy bill, are often much larger.

Injured contractors may choose their own doctors and switch physicians at any time. So, they do not have to see the company doctor. They can get top-quality treatment from a top professional, and the DBA insurance company usually pays the bills directly. Many victims never see a statement, and they are not responsible for any unpaid charges.