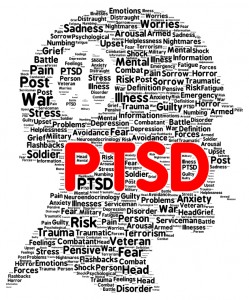 While serving overseas, it is only natural to encounter hazardous environments. Unfortunately, encountering such extreme stressors as combat or natural disasters can cause long-lasting problems in individuals, both military and civilian. One such effect is post-traumatic stress disorder. While it is estimated that almost 7.8 percent of Americans and approximately 30 percent of individuals who spent time in war zones suffer from PTSD, there is still a lot that researchers do not know regarding the disorder. While this may be the case, there are constant developments being made when it comes to disorders such as PTSD. Recently, researchers have developed a new form of treatment to assist individuals with PTSD.

Post-traumatic stress disorder is a psychological disorder characterized by psychological strain or stress. Post-traumatic stress disorder can generate from a variety of situations, but it generally develops after an individual experiences a traumatic event. Traumatic events that lead to PTSD typically involve a shocking and terrifying incident, creating an excess of strain or stress not otherwise found in ordinary incidents. A traumatic event is more than just a stressful situation, however, and is typically identified by feelings of extreme danger towards one’s life or the lives of those around, and may be accompanied by feelings of helplessness or loss of control.

Everyone encounters stressful situations in their daily lives, but as most people are aware, not all traumatic events may lead to the development of PTSD. While researchers have not pinned down any concrete factors that indicate who will and will not develop PTSD in any given situation, there are some factors that can indicate the likelihood a person will suffer from PTSD. Factors include, but are not limited to:

While researchers do not know everything about PTSD, they have identified several forms of treatment that can benefit individuals who suffer from PTSD. Just as PTSD can have a variety of symptoms that can impair a person’s life, there is an equally broad variety of forms of treatment available to individuals who suffer from PTSD. Typical forms of therapy can range from prescribed medications to therapies, and even forms of relaxation, such as yoga, working with service dogs, and horseback riding. Different types of treatment can include:

It is important to note, however, that not all therapies are created equal. For example, while recreational therapies can be beneficial to an individual suffering from PTSD, they should not be the sole form of treatment, and should be a complement to other forms of treatment.

Researchers are continuing to develop more forms of treatment that can further help people with PTSD. Recently, researchers at Tel-Aviv University, in cooperation with the IDF, the U.S. military, and the U.S. National Institute of Health (NIH) have developed a computer program that may significantly improve the treatment of persons with PTSD. The study, which was published in the American Journal of Psychology, focuses the computerized treatment on one particular cause of the behaviors encompassed by PTSD.

According to Prof. Yair Bar-Haim, the behaviors typically associated with PTSD are caused by the PTSD sufferer’s abnormal volatility in the monitoring of threats in the environment. While Prof. Bar-Haim notes that all individuals have a cognitive system that monitors threats in the environment, for individuals with PTSD, that system becomes wild and disproportionate to genuine threats.

Working from there, Prof. Bar-Haim, along with doctoral student Rani Abend, collected data regarding the influence of the threat-monitoring system on PTSD symptoms. With that data, Prof. Bar-Haim developed a computerized training program aimed at re-balancing the cognitive systems of individuals suffering from PTSD.

Experiments of the newly developed computerized system were performed in the IDF Medical Corps unit that deals with soldiers’ reactions to battle, with approximately 40 U.S. Afghanistan veterans participating in each trial. The program in question consisted of a process aimed at normalizing patterns of reactions. Soldiers were asked to identify an arrow, facing either right or left, by pressing the corresponding button on a keypad, with threatening faces or words being added on later. Researchers found not only a significant reduction of symptoms in participants, but also, that a large number of participants recovered from PTSD.

While this form of treatment is not widely available yet, the benefit of such a development is not only that it is accessible and affordable, but also because it does not require the administration of a trained psychologist or psychiatrist.