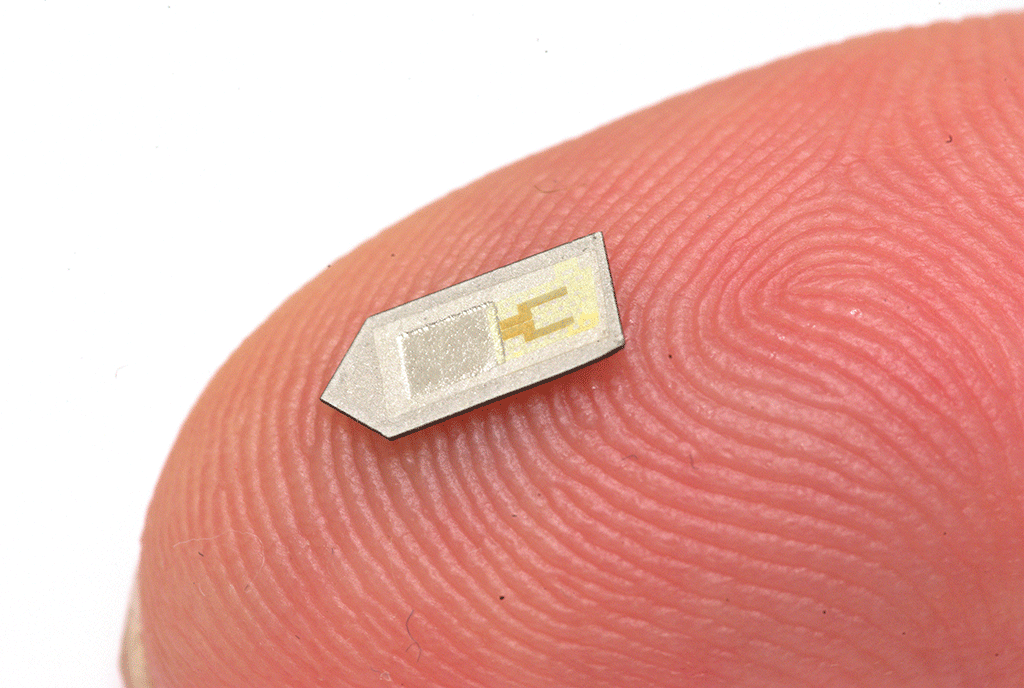 Head injuries are notoriously difficult to detect and treat, but a new diagnostic tactic is now being tested in laboratory animals by researchers at the University of Illinois at Urbana-Champaign and Washington University in St. Louis.

Current brain injury monitoring techniques rely on cumbersome electrodes and wires that can only be used in controlled conditions, or on risky implants that may have an effect as bad as the underlying injury. But using advanced silicone sheets that are microscopically thin, Drs. John Rogers and Wilson Ray have developed a tiny silicone implant that is no larger than a grain of rice. It contains a sensor that measures temperature and pressure in the intracranial fluid, and then sends this information to a postage stamp-sized embeddable chip on the patient’s skull. Even better, the silicone implant naturally dissolves after only a few weeks.

Initial research has been promising. Dr. Rogers predicted that the dissolvable implants “have potential across a range of clinical practices, where therapeutic or monitoring devices are implanted or ingested, perform a sophisticated function, and then resorb harmlessly into the body after their function is no longer necessary.” In addition to their convenience and lack of side-effects, the implants are also reliable, “with a measurement precision that’s just as good as that of conventional devices.”

Another researcher, Dr. Rory Murphy, expressed hope that human trials would begin soon, and that eventually doctors could use the combination of dissolvable sensors and wireless transmitters on a routine basis.

Brain injuries are so difficult to diagnose because serious symptoms may not become apparent for weeks or even months, and by that time, the victims and their families may not be able to connect the symptoms with the event.

things are dismissed as shock from the event. It is only later that other effects and deficits begin to appear, such as:

Because dead brain cells never regenerate, these effects are always permanent. However, after extensive physical therapy, neighboring regions of the brain often learn to assume the lost functions, so a somewhat normal life is eventually possible.

Traumatic Brain Injuries are sometimes called the signature wound the American presence in Iraq and Afghanistan. This is in part due to the prevalence of IEDs in these theaters. The potential for traumatic injury in these locations affects not only soldiers, but contractors as well.

Brain injuries are common with IEDs because explosive blasts nearly always cause serious falls–with a high risk that the head makes contact with hard objects. Additionally, although scientists are unsure exactly why, the noise from the blast itself also causes many TBIs. This noise risk may also apply in other settings where overseas contractors face injury risks.

Overseas contractors who are still working this these areas face TBI dangers even years after the main fighting has ceased. Due to the nature of these conflicts, all those in these spheres are at risk of a sudden ambush from a militant group, a car bomb, and similar events.

The DBA provides monetary compensation for medical benefits that are related to the work injury for as long as those services are medically necessary. In terms of lost wages, there are four different categories:

Computation of the AWW is not entirely subjective because it also includes a “reasonable” estimate of future earning capacity.

A TBI is a degenerative condition that has lifelong consequences for victims and their families. For prompt assistance in this area, contact the experienced attorneys at Barnett, Lerner, Karsen & Frankel, P.A. today. We stand up for victims’ rights.

Are Biodegradable Devices the Future of Brain Injury Monitoring?